Music for the Netherfield Ball


It's been a long journey, but my ninth collection of harp music is complete! Music for the Netherfield Ball: Songs and Dances of Jane Austen's Era debuted this month as an ebook available from the Sylvia Woods Harp Center. The print edition will be available this summer. The book has already made the news in the Jane Austen Center's online newsletter, which was both humbling and a thrill for this longtime Austen enthusiast.


I read Jane Austen's works for the first time not long after discovering the Celtic harp. I was 13. I love both, but I never thought to put the two together until I encountered a booklet about the Austen family's music collection.

In 2005, researchers Ian Gammie and Dr Derek McCulloch published a catalogue entitled Jane Austen’s Music. It was the first complete appraisal of the eight books of music once belonging to Austen and now housed at the Chawton House Library, in Hampton, UK, which had, in the words of the authors, “never before been fully catalogued and on closer inspection proved to have 300 musical items.”

I was fascinated to learn how eclectic and varied that music is, ranging from what we would consider classical, to the popular songs of the day. I was especially intrigued that the collection contained numerous Scottish and Irish folk songs that would be classed today as “Celtic.”


Currently, the Chawton Library houses 17 volumes of music once owned by the Austen family. They are a mix of printed sheet music and hand copied pieces, composed music and traditional airs. Three volumes have music that were copied out by Jane herself. Several others are inscribed with her name. Jane played the pianoforte, not the harp, but she was familiar with the instrument. The single-action pedal harp, invented around 1780, was a popular instrument in Austen's lifetime. This was the instrument played by accomplished—and wealthy—young women like Mr Darcy's sister Georgiana in Pride and Prejudice, the worldly and wealthy Mary Crawford in Mansfield Park, and by Austen's own somewhat scandalous cousin, Eliza de Feuillide.


As I delved deeper into the musical world of Jane Austen I found an unexpected connection in the traditional airs to the ancient harping traditions of Scotland, Ireland and Wales. The Romantic movement that sent folklorists and song collectors in search of forgotten lore revived portions of those traditions. They embellished the songs with a baroque profusion of ornament and set new lyrics to them, but the airs themselves remain rooted in history.

Some of the traditional Welsh harpers found new employment performing and teaching when the single-action harp was imported from France in the 18th century. A Welsh harper reportedly performed Handel's celebrated harp concerto when in debuted in London, and George III,  king during Austen's lifetime, and his son the Prince Regent (for whom the Regency era is named), each had a royal Welsh harper at court.

Music for the Netherfield Ball contains a selection of the Scottish and Irish traditional airs so popular in the era, including several attributed to the old harpers, together with composed pieces by Mozart, Handel and Gluck, and a smattering of Welsh, French and Italian folksongs. All but one of the 19 tunes in Music for the Netherfield Ball have a direct connection with the Austen family, two pieces are said to have been among Jane Austen's personal favorites.

The 19th piece in the collection slipped in by way of the 1995 television adaptation of Pride and Prejudice. “Mr Beveridge’s Maggot” predates Austen’s era by more than 100 years and is regarded by the experts in all-things-Austen as entirely anachronistic in its use as a dance, but it's much-loved by many Janites, including the author.


In assembling the music for this collection, I imagined it as a sampling of occasional music that might be played at a country gathering like the Netherfield Ball in Austen’s Pride and Prejudice: a mix of popular music, folk songs, and composed works, intended to entertain and give joy. 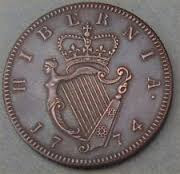 Many years ago, a friend gave me an Irish farthing coin like this one, for luck. The harp on the cover of my book is inspired by that mythical harp of Ireland, decorated with a winged and fish-tailed siren. Regardless of whether the actual instruments continued to be played, the ancient harp has remained a symbol of Irish identity, and the music associated with the tradition had as much cachet in Jane Austen's era as it does today.


Music for the Netherfield Ball is available in ebook form for $15.95 US via the Sylvia Woods Harp Center. The print version is coming soon. The collection includes: 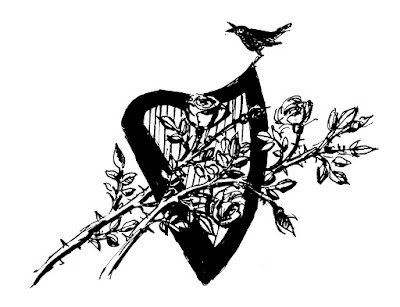 One of the pieces in the Austen family music collection is the Welsh traditional tune "Nos Galen," best known today as the Christmas carol "Deck the Halls." It is copied out in Jane Austen's own handwriting, and none too carefully—there are several careless mistakes. As I looked at the arrangement—a set of increasingly more complex variations on the theme, I recognized the setting. It was copied, nearly note-for-note, from Welsh harper and antiquarian Edward Jones' book Musical and Poetic Relicks of the Welsh Bards, published in 1784. Jones attributed the tune to Rory Dall, one of the great 17th century traditional harpers.

An ancient Welsh harp tune attributed to a legendary harper, copied out by Jane Austen in her personal collection of pianoforte music, begin played from the screen of a computer by a 21st century harper 200 years later. It was a strange experience, as if, for a moment, all that time between then and now didn't matter at all.

I enjoyed researching and arranging the music in this collection tremendously. I hope you, dear reader, enjoy playing it. 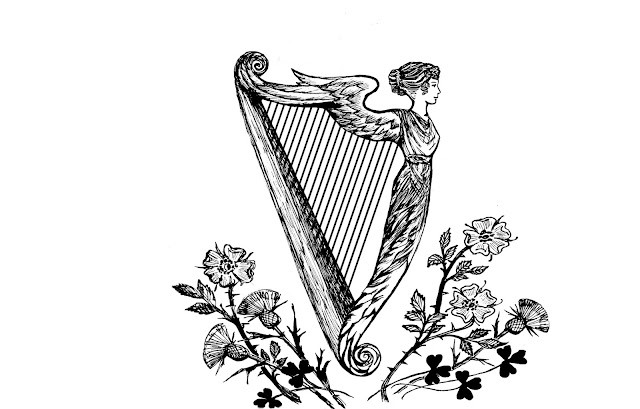 Posted by Suzanne Guldimann at 10:38 PM